Before this week’s challenge slips away, I want to include some architecture with remarkable powers of endurance. This is the little Romanesque church in Taizé, France, the yearly destination of thousands upon thousands of pilgrims, especially young adults. (Romanesque in European art terms means medieval architecture from approximately the year 1000 into the 13th century.) It was Pope John XXIII who gave the church to the ecumenical community of Taizé, after he visited and exclaimed, “Ah, Taizé, that little springtime!” Winter, spring, summer, fall — it is always springtime in the heart at Taizé:

The walls are so thick here, it seems sure that they will stand at least another 1000 years. And they enclose a silence that is so profound it seems to ring in one’s ears. The thrice-daily prayer in the Taizé community’s large Church of Reconciliation is wonderful, with its darkness and its candles, its flowers and its icons, its chants and its silences. But the silence in the little Romanesque church is of another order entirely. Two reasons for a visit to the little village on the hill! 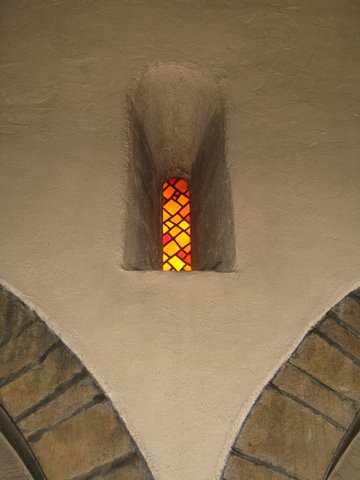